WOMEN OF FAITH PART SIX- IN PRAISE OF BUDDHIST WOMEN 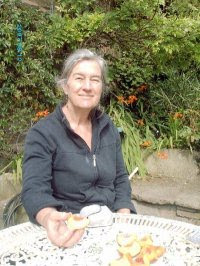 To mark Women's History Month PULTA has asked women who are faith inspired activists or leaders to share a stories of women who have inspired them as a person of faith. In the sixth of our series Ramona Kauth (pictured left) speaks out 'In praise of Buddhist women'. Ramona, a Buddhist practitioner for 35 years is a meditation teacher, counsellor, art therapist and inter faith activist she is the Chair of Birmingham Council of Faiths and is involved in the womens interfaith group Sacred Space, the Ladywood Interfaith Education Project and Faith Encounter Programme

In praise of some significant Buddhist women

This is just a brief introduction to several women important in the history of Buddhism and its establishment.

In the Therigatha, the oldest book of Buddhist scripture, the enlightenment of some of the women followers of the Buddha is narrated. From the beginning there were ordained women amongst the Buddha’s earliest followers. They were enlightened and teachers in their own right during the Buddha’s lifetime (around 5th century BCE). Patacara was such a woman, her tragic life and her encounter with the Buddha is very moving. She had a very large following of women disciples. In a very Zen-like episode, the moment of her awakening was told: The breaking of a jug, spilling the water, then putting out the light marked the moment of her realisation. In time-honoured tradition, she recites a poem of realisation:

“I’ve done everything right and followed the rule of my teacher.
I’m not lazy or proud, why haven’t I found peace?i

I watched the bathwater

Spill down the slope.

I concentrated my mind

The way you train a good horse.

Then I took my lamp

And went into my cell,

And sat down on it.

I took a needle

And put the lamp wick down.

When the lamp went out

My mind was freed.”

Much later, in eighth century Tibet, a young woman rejected the offers of her many suitors and fled her parents’ home to seek a teacher in the wilderness of the Himalaya. She found the heroic, charismatic teacher called Guru Rinpoche, Padmasambhava, “the Lotus Born”, the teacher that firmly established Buddhism in Tibet. She became his chief disciple and a powerful Guru in her own right. She carried on his mission after him to spread and maintain the teaching of the Buddha. Her name was Yeshe Tsogyal. Her story is contained in Lady of the Lotus Born.ii

Today, in the wilderness of Wales, Lama Shenpen Hookham works to communicate the teachings of Tibetan Buddhism. In India in the 1960’s she became a Buddhist nun in the Karma Kagyu School of Tibetan Buddhism, the first English woman to do so. Having completed all the very challenging preliminary practices required she is recognised as a Lama. She has written Buddha Withiniii, an introduction to the philosophy of mind in Buddhism (the book of her Oxford PhD). Recently has written There is more to dying than deathiv as well as contributing to Meeting Buddhists vamong other publications. She has established a community called the Awakened Heart Sanghavi and between teaching and advising her students, spends a good part of her time in retreat

i The First Buddhist Women, translations and commentary on the Therigatha by Susan Murcott, Parallax Press, California, 1991

ii Lady of the Lotus-Born, The Life and Enlightenment of Yeshe Tsogyal by Gyalwa Changchub and Namkhai Nyingpo, translated by the Padmakara Translation Group, Shambala, Boston and London, 1999

iii Buddha Within, Tathagatagarbha Doctrine According to the Shentong
Interpretation of the Ratnagotravibhaga By: Hookham S.K.