I have been involved in the last couple of weeks getting together with others a statement to launch a network for resources for Christians to get involved in resisting the cuts and the Big Society. Below is the Networks opening statement

A Group of Christians - activists, ministers and theologians - have issued a statement calling upon Christians to unite with others in the movement to resist the governments cuts in public spending and welfare provision and to be cautious of being co-opted into the Big Society initiative. The document also articulates a radical theological critique of government policies and the social and economic order they seek to maintain.

Below is a summary of the statement and call. The full 5,000 word document can be downloaded at THE COMMON WEALTH Website
Christians in Britain today are called to take a stand. Faced with the biggest cuts to public spending for over a generation, it is not enough to retreat into the private ghetto of religious consolation.

As Christians, we are convinced that the actions of the current government are an unjustified attack on the poor[1]. The rhetoric of necessary austerity and virtuous belt-tightening conceals a grim reality: the victimisation of people at the margins of society and the corrosion of community. Meanwhile, the false worship of markets continues unchecked and the immorality of the growing gap between rich and poor goes unquestioned.

We call on the churches to resist the cuts and stand in solidarity with those targeted. We urge them to join the forces fighting back against a distorted ideology. Above all, we commit ourselves not to give in to despair, fear and fatalism. Another world is possible, the world announced by Jesus in his teachings, embodied in the love he took to the cross, alive in the Spirit of his risen strength.

Some might scorn such sentiments. After all, surely the government is sympathetic to Christian ideals? They promote the Big Society, in which the state hands power to individuals, entrepreneurs, charities, and, yes, faith groups. So shouldn't the churches be taking this opportunity with both hands? Shouldn't Christians show they can contribute through this ‘Big Society’ opportunity to easing the pain of these hard times?

We challenge this misconception. Not because we enjoy the luxury of opposition for its own sake, but because we believe that the rhetoric of Big Society is a Big Lie. It masks oppressive business as usual, suffocating all dissent with its phoney 'we're all in it together' soundbites. It is divide and rule dressed up as high-minded community spirit.

We recognize that, on the ground, churches and ministers are faced with difficult choices. We have to work within the current system as a means of trying to get the necessary resources to support the vulnerable and the poor. Sometimes that will mean taking government money with a ‘Big Society’ label to do what has to be done.

When we find ourselves ‘caught in the middle’ in this way we need to help and support each other making the right decisions, never forgetting that we have been placed in this position by a government which takes the side of big business.

It follows that any engagement we have with the Big Society agenda or its equivalents should always be guided - and often limited - by a fundamental critique of the present order. Praying and holding onto the vision of the Kingdom that is revealed in the Church’s sacraments and other symbols of transformation, we are called to speak against the false consciousness of the market driven idolatry in which we presently labour. Nothing should dim the fire of the hope that is in us.

In this document, we briefly set out why we take this position on specifically Christian grounds. We stand ready to work with those in other communities and traditions who resist the cuts.

Our Call
We encourage Christians to
· Sign this Statement and become part of the Common Wealth Network.
· Read and learn about arguments against the cuts and dominating myths about the need for debt reduction eg http://www.redpepper.org.uk/Countering-the-cuts-myths
· Explore study material arguing for a radical Christian vision for economic justice, based on recovery of Biblical tradition. Check out the resources page on Common Wealth website.
· Support and work with local anti – cuts alliances and the national co-ordinating bodies facilitating resistance to the cuts for instance The Coalition of Resistance http://www.coalitionofresistance.org.uk/
· Support workers to struggle for ways to more fully participate in their own economic wellbeing and that of their co-workers.
· Oppose the waste that spends billions on weapons of mass destruction like the Trident missile system
· Seek ways to share our wealth from rich churches to ones based in poorer communities in funding projects to alleviate the worst excesses of the cuts and to assist organizing grassroots community organized resistance
· Support initiatives like Church Action on Poverty and its community organising arm ChangeMakers empowering local communities often at the brunt of the cuts in public services and welfare benefits to speak and act for themselves.

REMEMBRANCE & THE PRINCE OF PEACE

I was a little taken aback last year when rung by the Steward of the church I was preaching at on the Sunday before Remembrance Day. She informed me that they expected a two minute silence at 11am -just the time when the service I had planned would be in the middle of the sermon and the breaking of the Word. I was heartened and encouraged in my keeness to renegotiate such an intrusion into the Preaching Service when I read Angela Sheir Jones' blog later that day and her reflection on Poppys and Peace, which is well worth a read.
I would want to go further than Angela though as I have never been keen to wear a red poppy in or out of church and have for several years supported the Peace Pledge Union's White Poppy Appeal. However, I am even more averse to the symbol of the Red Poppy as we see it recruited to muster support for the outrageous invasions of Afghanistan and Iraq.

Last year the excellent Christian 'think tank' Ekklesia published an interesting looking report questioning Rememberance Day culture and making positive proposals as to how it might be revised.Reimagining Remembrance can be downloaded from the Ekklesia website.

I did hold a two minute silence at the beginning of the service on that Sunday, a silence that was prefaced by three stories - the first was told to me by an elderly member of Droitwich Spa Methodist Church about his experience as a soldier in the 'second world war', a war, he believed was necessary to rid the world of the evil of Nazism. His story was of fighting alongside Muslim soldiers from what is now India and Pakistan and how he was moved by their devotion and commitment to prayer five times a day and how he felt it was their prayer that helped him get through the horrors of the war. The second is a story from my wife Annies'' family. The story is of her paternal Grandfather and Great Uncle who chose because of their Christian faith to carry stretchers and not guns and were two of hundreds of young working class Methodist Concientious Objectors, in that futile and murderous war of 1914-18. The third will be of my experience of recently living for a year close to a hospital in Birmingham that treats the wounded soldiers from Afghanistan. I wear my white poppy not out of any disrespect to them but as a reminder of the frequent sight of their bandaged amputated legs as relatives or friends pushed these young people up the street passed my window, the reminder of that sight and the memory of the thousands of Afghans and Iraqis killed or maimed, calls me not to stay in silence but to renew my opposition to these latest futile and murderous military ventures, in the name of Jesus - the Prince of Peace.
Posted by Ray Gaston at 10:37 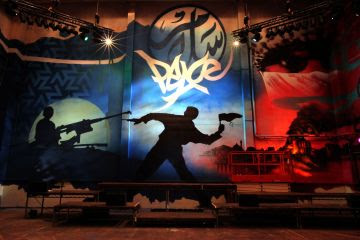 I had a lovely time the other week being interviewed by Mohammed Ali also known as AerosolArabic for his Soul City Radio show on local Unity FM radio in Sparkbrook. Mohammed is an internationally renowned Birmingham born graffitti artist who develops in his work a fusion between Islamic calligraphy and contemporary street art and has recently opened up a community arts space - The Hubb - in the heart of Sparkbrook Birmingham. He has just published a short article on his work on the international Common Ground website. He also has an interesting exhibition on in Coventry at The Herbert Gallery called Breaking Down The Wall. On 11th November he will be speaking at the Herbert on Can Graffitti Art Really Change The World and on 19th November he will be performing live with other artists at The Herbert Gallery exploring the themes of Justice, Freedom and Peace that are at the centre of his work. He is also talking about his work at the Urban Theology Forum at Birmingham University on the afternoon of 10th November contact Chris Shannahan for details. Mohammed Ali reflects a new generation of Muslims exploring a new process of dialogue that is developing beyond the world of official 'interfaith'
In his own words:
It’s an important time to challenge .. stereotypes and encourage real dialogue between ordinary people with different ideas, identities and backgrounds, not leave it to faith leaders sharing tea and biscuits. Art is one way of facilitating this dialogue. In my art, I convey principles – peace, justice, brotherhood and respect – that I believe are fading away from our modern societies, but which I highlight to make people aware that they do in fact share common principles. For the average Joe or Jane who travels to work during rush hour traffic, and for local residents who walk past a particular mural every day, I want the walls that carry my messages to come alive and remind people of these shared principles.
Posted by Ray Gaston at 12:31