Today was Holocaust Memorial Day. Last Sunday I attended the Birmingham Memorial Event at the Town Hall. Particularly moving was survivor  Mindu Hornick's reflections upon Father Dubios' book Holocaust by Bullets. On Thursday I went to The Progressive Synagogue for an event and display that focussed  particularly on the children of survivors

My own reflections on the Holocaust have been shaped by my recent reading of a group  of Jewish philosophers and theologians who led from the mid sixties onwards a serious engagement with the reality of the Holocaust and the radical evil that it represented. Among these thinkers I have found myself drawn into and being moved, challenged, inspired, confused and provoked  by the work of the late Emil Fackenheim.  Fackenheim himself only just escaped Nazi Germany in the late 30s after having experienced a period in a concentration camp. This Guardian Obituary at the time of his death in 2003 captures the complexities and contradictions of the man I've encountered in his writing and memoirs as does this penetrating and critical exploration. 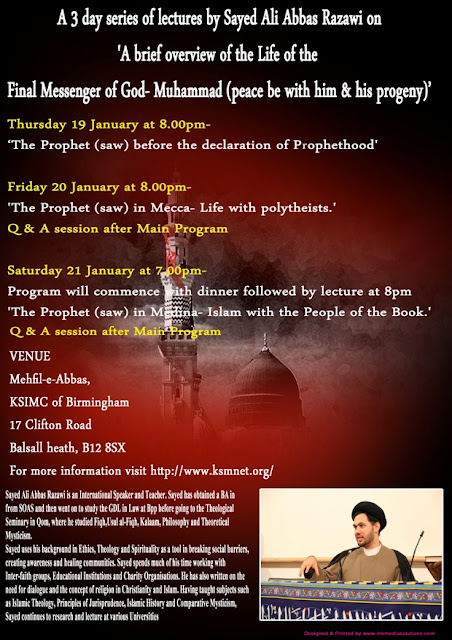 Update: I managed to get to all three talks and thoroughly enjoyed the experience. Thanks to all at KSIMC for their lovely hospitality and to Sayed Ali Abbas Razawi for a stimulating and thoughtful series as I tweeted after the first night 'experienced once again the beautiful gentle passion at the heart of Shi'a spirituality'


Sheikh Muhammed Amin Evans has sent out the following invitation from Clifton Road Mosque in Balsall Heath. I hope to attend on Saturday evening for the third talk

"The President of Clifton Road Mosque has asked me to convey an open invitation to organisations and individuals involved in interfaith, intra-faith or the City's life as a community to share three evenings with the members of KSIMC including three lectures on the life of Prophet Muhammad (saw) to mark the anniversary of his passing.  It is appreciated that not everyone will wish or be able to attend on all three evenings but we hope that many people will be able to accept our invitation and attend at least one of our gatherings.

Visitors are invited to arrive at the gates 45 minutes prior to the event start time.  Volunteers will then guide them to an assembly room for welcome drinks and conversation with Sayyid Razavi (the lecturer), President Br Shafik Hajji and I.  We will attempt to connect the lectures and provide some background to the events to be discussed so that you may more fully engage with the event.

Thursday 19 January at 8.00pm- 'The Prophet (saw) before the declaration of Prophethood' 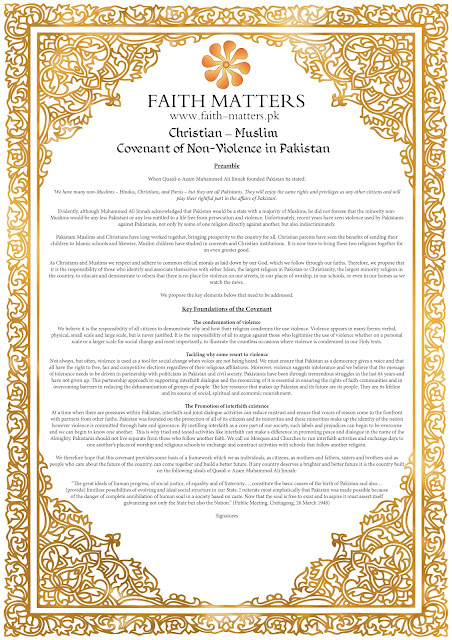 Two interesting stories from Pakistan and Egypt point to hopeful developments in Christian - Muslim relations in contexts that have often been seen as places where Christian minorities have been vulnerable to religiously motivated violence.

The second story is from Egypt where the Muslim Brotherhood has vowed to protect Coptic Churches that have in the past been attacked at the time of the Celebration of the Coptic Christmas in January.
Posted by Ray Gaston at 20:15 No comments: