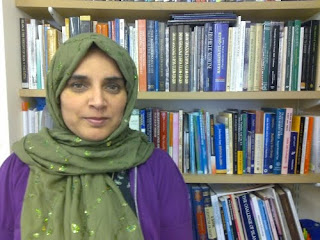 To mark Women's History Month PULTA has asked women who are faith inspired activists or leaders to share a stories of women who have inspired them as a person of faith. In the final reflection in our series Amra Bone (pictured left) who is Chair of Coventry City Circle and an Executive member of West Midlands Faiths Forum, and sits on the Birmingham Shariah Council reflects on the inspiration she recieves from the Qur'anic model of women's leadership expressed in the story of the Queen of Sheba

In the name of God the most merciful, the most compassionate……

I am inspired by the Queen of Sheba (known as Bilqis in the Arabic literature) in the Quran. I hear every now and then women cannot be leaders, as men are more suitable for the position of leadership. Those who support this opinion cite some Hadiths to back up their view. The Quran holds the uppermost authority as well as being the most authentic source of knowledge and the hadiths cannot and must not contradict its message. Hadiths come in various forms of categories-authentic, correct, good, weak and forged etc.

[When the Queen had read Solomon's letter,] she said: "O you nobles! A truly distinguished letter has been conveyed unto me. (27:30) Behold, it is from Solomon, and it says, 'In the name of God, The Most Gracious, the Dispenser of Grace: (27:31) [God says:] Exalt not yourselves against Me, but come unto Me in willing surrender!'"23

and consults her courtiers for advice before she proceeds to make a decision,

She added: "O you nobles! Give me your opinion on the problem with which I am now faced; 24 I would never make a [weighty] decision unless you are present with me." (26:33) They answered: "We are endowed with power and with mighty prowess in war - but the command is thine; consider, then, what thou wouldst command."

Said she: "Verily, whenever kings enter a country they corrupt it,25 and turn the noblest of its people into the most abject. And this is the way they (always] behave.26 (27:35) Hence, behold, I am going to send a gift to those (people], and await whatever [answer] the envoys bring back."

She contemplates and reasons that should she take an action showing her strength that may lead to a disastrous consequences. She buys time by sending Prophet Solomon a gift and waits to see how he reacts. Besides her wisdom she is also honest and sincere in her actions as shown later in the story and when shown the truth she submits herself to God.

Above are some of the qualities of a leader, which is not an exclusive right one sex over another, clearly displayed in the story of the queen of Sheba. She is an example of a good leader who acts with patience, wisdom and seeks advice before making a decision.

The more I have contemplated on the example of Biliqis the more I treasure it. Her example gives me strength and confidence in the leadership of women. Should a woman choose to be a leader displaying such qualities no one should stand in her way. There are plenty of male leaders who lack her wisdom, strength and spirituality and I hope they can show humility and learn from the leadership of a woman from the Quranic story of the Queen of Sheba.