In Memory of Her

I have been to a couple of Ordinations this month where the majority of candidates were women. Its a long time since I was at an ordination ceremony and as I sat in Worcester and Gloucester Cathedrals I remembered the times I stood outside Ripon Cathedral in vigils as a member of the Movement for the Ordination of Women in the late eighties as the campaign for Women priests entered its final phase. I also reflected on that amazing day on 11 November 1992 when the vote went through General Synod and the great feeling of being in the crowd of women deacons and their supporters outside Church house as the vote was announced and cheers and tears of joy were shared in the crowd ( you can see the BBC video report of the vote here). Roll on Women bishops - Check out the WATCH website for current campaigns on Women and The Church of England. Good news from the Methodist conference (who were ordaining women long before the CofE) yesterday as for the second time in recent years two women were elected as Chair and Vice Chair of the conference for 2010/11
I am still amazed by the objections to women's ordination and women's leadership in the church, especially when one looks at the practice of Jesus. Not only did he let women fund him and resource his ministry, but he accepted - to the horror of his immediate circle of men - the priestly ministrations of a woman who annointed him for burial while the in crowd of 'apostles' were failing to understand what he was saying about what was about to befall him. In Mark's orginal and powerful telling of this story the faithful woman disciple remains anonymous. Elizabeth Schussler Fiorenza comments on this in her wonderful book In Memory of Her:
In the passion account of Mark's gospel three disciples figure prominantly: on the one hand, two of the twelve - Judas who betrays Jesus and Peter who denies him - and on the other, the unnamed woman who annoints Jesus. But while stories of Judas and Peter are engraved in the memory of Christians, the story of the woman is virtually forgotten. Although Jesus pronounces in Mark: 'And truly I say to you, whereever the gospel is preached in the whole world, what she has done will be told in memory of her' (14:9), the woman's prophetic sign- action did not become part of the gospel knowledge of Christians. Even her name is lost to us. Wherever the gospel is proclaimed and the eucharist celebrated another story is told: the story of the apostle who betrayed Jesus. The name of the betrayer is remembered, but the name of the faithful disciple is forgotten because she was a woman.
You can read a reflecton on this story, based on Fiorenza's approach, here.

Faith traditions often have an egalitarian gender dynamic at their roots that has often been betrayed by later capitualtion to patriarchal culture. Islamic Scholar Asma Barlas points to the radical message about women in the Qur'an and the Sikh religion at its roots has a strong demand for equal treatment of women in education and society. I reflected upon this as Amra Bone a Muslim and Gopinder Kaur Sagoo a Sikh spoke passionately about their faith and work at the Inter Faith fringe event at The Methodist conference in Wolverhampton on Monday evening. The event, with an all women panel that also included Deidre Burke a Jewish woman and Ramona Kauth a Buddhist, was orginally concieved by a small group of us at a meeting in London last February. My own thinking for suggesting the all woman panel was the need to acknowledge the leading role played by women of all faith communities in the Inter Faith movement and in community activism in the West Midlands - it was unfortunate that so few people from the conference came to hear the quality of what was shared. 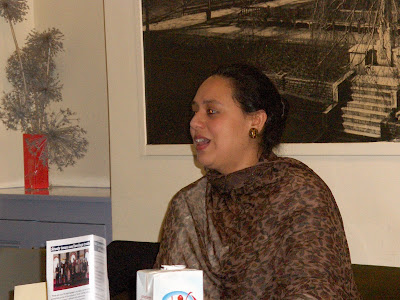 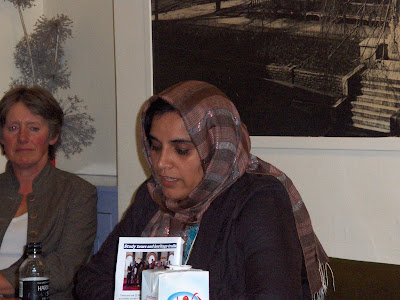 Another local example of a woman of faith playing a leading role in community politics and social change is Birmingham City Councillor and Muslim Salma Yaqoob. Recently she was interviewed for television about the increasing problem of drugs and gangs in local communities of the West Midlands drawing on her experience as a woman, person of faith and community activist the interview can be seen below