World Week for Peace in Palestine Israel Vigil in Birmingham

On Thursday 3 June at 1pm, a local network of Christians will hold a vigil in the grounds of St Phillips Cathedral, as part of a ‘World Week for Peace in Palestine Israel’.

The ‘World Week for Peace in Palestine Israel’ is an initiative of the World Council of Churches, who have invited all those “who share the hope of justice” in Palestine/Israel to “take peaceful actions, together, to create a common international public witness”.

Revd. Ray Gaston, Interfaith Enabler in Birmingham for the Methodist Church, says that the vigil will stress the need to “build bridges not walls”. “We will be saying that ‘it is time for Palestine’ – time for Palestinians and Israelis to share a just peace, and time for equal rights.”

The vigil will be a mixture of prayer, silence and reflection, responding to the call of Palestinian Christians in the ‘Kairos Palestine’ document, published last year, for Christians worldwide to “help us get our freedom back” and “help the two peoples attain justice, peace, security and love”.

While the vigil is organised by Christians, the reflections will be led by women of the three faiths of the Holy Land:

· Salma Yaqoob – a Muslim and a local councillor, anti-war and community activist. Salma was one of the leaders of the Birmingham campaign against the Israeli bombing of Gaza in 2009.

· Barbara Payman – a Jewish woman and member of a local Reform Congregation. Barbara is a trustee of the interfaith charity Spirit of Peace that works closely with The Jerusalem Peacemakers, an interfaith network working for reconciliation in the Holy Land.

· Shari Brown – a Christian and the Coordinator of Restore (a project of Birmingham Churches supporting refugees). Shari recently spent three months as an Accompanier with the Ecumenical Accompaniment Programme in Palestine and Israel (EAPPI).

Website for the World Council of Churches’ ‘World Week for Peace in Palestine Israel’
http://www.oikoumene.org/en/events-sections/wwppi.html

Website for the ‘A Just Peace for Palestine’ campaign
http://www.justpeaceforpalestine.org/

DISCIPLESHIP IN A MULTI FAITH WORLD 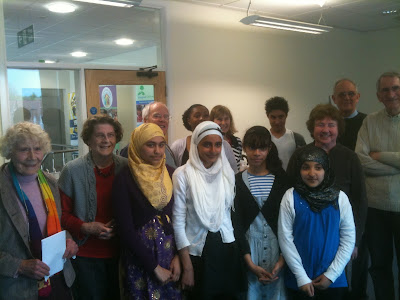 This Spring I have been developing my work in the Birmingham District and ecumenically. I have been running courses for The Worcester & Malvern Circuits, Hall Green Council of Churches and working with a Cell Group at Saltley Methodist Church, a taster workshop for the Asbury Circuit and continue working with an ecumenical group of Church Leaders in Shirley. What is nice is that each group has a very different dynamic and different needs. So under the broad banner of Faith Hope & Love - Exploring Christian Discipleship in a Multi Faith World, I work out a specific programme with each of the groups. With Saltley we are getting into some serious bible study in our second session we took a look at the story of Abraham and what it might have to say for Christian engagement with other Faiths today. With Worcester and Malvern I am running three Saturday workshops - The first in April was on Exploring Bible & Theology in a Multi Faith World , and the Third at the end of June will be looking at Exploring Christian Spirituality in A Multi Faith World. The second workshop was last Saturday on the theme of Exploring Other Faiths and the group came and spent the day in Birmingham visiting a Mosque , a Hindu Temple and meeting with the workers and young people at the FEAST - a Christian initiative to bring Christian and Muslim young people together. The picture above shows that the encounter with the young Muslim people from the Feast was not only inter faith but inter generational too - bringing Muslim young people together with Christian elders it was a great day.
I also had the privilage of presenting a session at the District Spring Synod and will be running a workshop at the Building Vision Day this coming weekend in Handsworth. I am exploring with the Asbury circuit about a course in the autumn and a workshop on preaching in a multi faith world with preachers in Evesham.

If you would like me to come and work in your circuit or with a group in your church get in touch!
Posted by Ray Gaston at 15:49

UPDATE ON 'A HEART BROKEN OPEN'

I have been informed by the publishers that well over 300 copies of my book have now been sold since the official release at the beginning of March. I also see that Peace News have a nice review of it in their May edition, although the subeditors choice of title disappointingly asserts old misunderstandings about the arabic word for God.
I have also been invited onto the Rattansi & Ridley Show that is broadcast through Sky on Press TV to talk about the book.
There is also going to be a Leeds/Bradford launch of the book on 26th May organised by The Leeds Church Institute and Bradford Churches for Dialogue and Diversity.
Posted by Ray Gaston at 17:19

A QUICK VISIT TO LEEDS 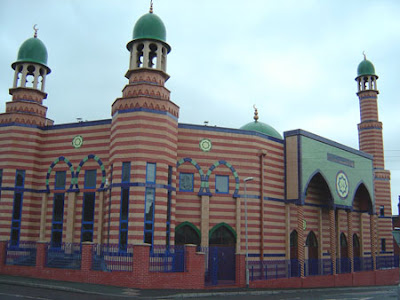 Last Saturday (May Day) I had a quick trip up to my old stomping ground in Hyde Park Leeds as I had been invited to speak at The Makkah Masjid's 'Connecting Communities' event that opens their annual Islamic Exhibition. Makkah Masjid is a lovely space built by the local Muslim community from money they raised themselves. It was nice to see old friends and new, especially Imam Qari Asim, son of my late friend and teacher Professor Hafiz Fateh Muhammad Sahib and to discover that my successor at All Hallows, Revd Steve Smith, who has continued developing the links with the mosque, was present at the event and had recently himself been invited to speak at the celebrations for the birthday of the Prophet Muhammad.
Asim was kind enough to ask me to bring copies of my book to sell and then bought 10 copies for the Mosque!
Posted by Ray Gaston at 14:42