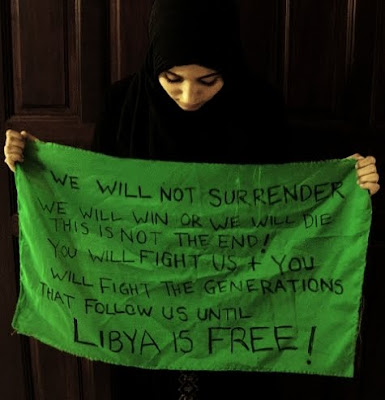 The Following statement from a group of Islamic Leaders in Libya calling themselves the Network of Free Ulema is being posted on the web note that they ask for help - NOT sanctions. This statement follows an earlier one from the same group calling upon people in Libya to rise against the Gadaffi regime

statement from The Network of Free Ulema – Libya: “To the religious leaders of all faiths, to the political leaders of all countries, to the heads of all international organizations, and to all men and women of good will. As servants of the brave and dignified Libyan people, the Muslim Scholars and Tribal Leaders of Libya are united in informing you of the following:

We are grateful for all the great efforts that are now being made to stop the massacre of our people. However, we urge you to please hurry and redouble your efforts. We have already lost thousands of our brave youth, and the injured are now in the many thousands.

Please urgently send into Libya as much medical and humanitarian aid as possible. The Egyptian-Libyan border, Benghazi Port, and Misrata Port are now open, and we urge Libyans inside and outside the country to help in every way they can with logistics and distribution. We very much appreciate the early response from Turkey and from the International Red Cross/Red Crescent in this regard.

Internationally, we expect all punitive actions and measures to be directed and applied to Gaddafi personally, his family, close associates, and their mercenaries, and any other complicit parties.

We do not support ‘sanctions against Libya’ or anything against Libya. All actions and measures should be against Gaddafi himself, his family, their close associates, and their mercenaries. Judicially these criminals have no official governmental positions, and D0 NOT constitute the Libyan government. They have N0 immunity. The approach that should be taken by all who are trying to help us is that of urgently issuing and applying International Arrest Warrants for clearly committing crimes against humanity, to be pursued in the International Criminal Court.

The brave Libyan people will endure and are now more unified than ever, through the grace of God and the blood of our martyrs. We are certain of, and look forward to, the inevitable victory, promised by God to the oppressed of the earth.”