MUSLIMS & CHRISTIANS AND THE EGYPTIAN REVOLUTION 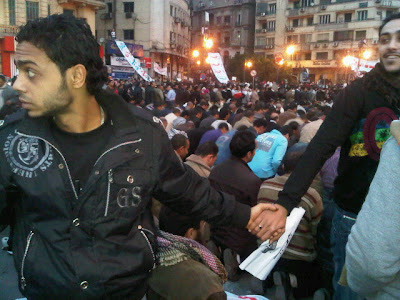 One of the interesting and underreported elements of the Egyptian revolt has been the cooperation between young Christians and Muslims. The following article is originally from the Common Ground News website and I discovered it posted on the website Bikya Masr

CAIRO: The recent protests in Egypt that led to the resignation of President Hosni Mubarak, and their political ramifications, have been covered extensively in the media. But stories of Christian-Muslim solidarity have not been broadcast as widely, and they deserve to be.

During the protests, Christians stood in a circle around Muslims during their Friday prayers to protect them from police. And last Monday, Muslims stood around Christians in Tahrir Square as they conducted mass, and joined them in prayer for those who were injured or died in the protests.

Prior to the demonstrations, there was a growing fear in Egypt that tensions between Muslims and Christians would escalate and culminate in violence, especially in light of recent attacks that targeted Christians in the region, the latest of which was the bombing of a church in Alexandria on New Year’s Eve that killed 23 people.

To prevent such violence from reoccurring, Egyptians began to mobilise through a new online initiative called “An Internet Free of Sectarian Strife”, launched by Amr Khaled, who is described by The New York Times as “the world’s most famous and influential Muslim television preacher.” He began the initiative in January after he saw how the Internet was being used to disseminate rumors and agitate tensions between Muslims and Christians in the country.

Word of the initiative spread quickly, and it has proven very popular among Egyptian youth primarily because of Khaled’s huge following in the country. The roots of this initiative began with his lectures in 1998, after years of terrorist incidents claimed the lives of innocent people and religious bigotry began spreading among groups that were adopting extremist interpretations of Islam.

Many have found messages of balance and harmony in the young, dynamic preacher’s rhetoric, which are all too rare in other speakers’ lectures. Between 2000 and 2002, his lectures – mainly about tolerance in Islam – were being attended by audiences of 35,000. Today, his Facebook page has around two million friends and his lectures are watched by millions across the Muslim world.

It is clear that youth are playing a key role in the initiative’s implementation and development.

The “Internet Free of Sectarian Strife” initiative features prominently on Khaled’s website (amrkhaled.net), which receives around two million visitors every month. Many Egyptian youth have replaced their Facebook profile photo with the initiative’s logo, a cross within a crescent. Other websites and forums from around the region have also included the logo on their websites to promote the campaign.

The initiative’s main partners are influential media outlets in Egypt and the Arab world, including the Egyptian OTV television station and the news outlet Seventh Day, both owned by a leading Copt businessman, Naguib Sawiris; the United Copts website, which is managed by a group of Copts living in the United States and has an influential presence in Egypt; and the OnIslam.net website, which is managed by IslamOnline.net, a well-known Islam-focused outlet; as well as many youth-oriented Egyptian websites.

These partners identified ten basic items that they hope will become “rules for internet users and a code of honour for Internet media outlets to abide by.” The rules are to not use the following: blanket generalisations, foul language; rumours without credible sources, sarcasm, videos that could enflame tensions and violent or hateful fatwas (non-binding legal opinions). The rules also encourage words of peace and compassion, respect for others’ faith and disagreement with ideas, but respect for individuals. Finally, partners have agreed that users should never post their opinions while angry.

This initiative is promising and could lead to improved Muslim-Christian relations in Egypt. However, the core solution lies in addressing the problems that create such tension in the first place.

Some solutions that can be enacted on the national level include: allowing all citizens the right to build houses of worship, amending school curricula to promote religious freedom, ensuring that authorities handle conflicts between members of different religions according to the law as opposed to bias based on political alliances and ensuring equal opportunity in the workplace regardless of a person’s religious beliefs.

Khaled’s positive initiative is an important first step to address the core causes of extremism that lead to sectarian tension. The solidarity amongst Muslims and Christians during the recent protests shows that both groups can overcome divisions, and offers new hope that coexistence and religious equality can be the foundation of a new Egypt.

* Yasser Khalil is an Egyptian researcher and journalist. This article was written for the Common Ground News Service (CGNews).