AN EXAMPLE OF MORAL COURAGE AND PRINCIPLE 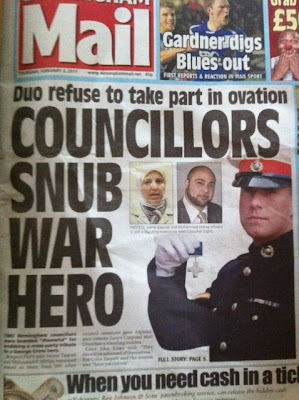 The news that broke in yesterdays's Birmingham Mail about local councillors Salma Yaqoob and Mohammed Ishtiaq's refusal to join in a standing ovation for a decorated soldier has led to a flurry of comment in the national dailies and on blogs, much of it of the usual vitriolic Islamophobic flavour. For what it's worth I have sent the following to the letters page of the Birmingham Mail
Well done Cllrs Yaqoob and Ishtiaq for remaining true to your principles despite enormous pressure to do otherwise.
The increasing weight upon us all to conform to supporting the government's invasions in Afghanistan and Iraq by exerting emotional pressure through the parading of 'national' heroes in the public space ( council meetings, football matches) is to be resisted; not out of a disrespect to an individual act of human courage like that of Matt Croucher, but out of a deep conviction that we should resist attempts to use Matt's example of human selflessness to legitimate a war that is so widely questioned both here and internationally. While Matt's action in falling upon a grenade to save his friends demonstrates the best of our humanity, the invasions of Iraq and Afghanistan remain examples of the worst of human endeavours. Salma Yaqoob's and Mohammed Ishtiaq's refusal to rise is directed against the latter and is commendable as an act of moral courage based upon conscience and principle and I for one respect and applaud them for remaining in their seats.


Rev'd Ray Gaston
Interfaith Enabler
Birmingham District of The Methodist Church
Addition on 12/2/11 - Great to see that my letter got published in Wednesday's edition of the Birmingham Mail
Posted by Ray Gaston at 12:08