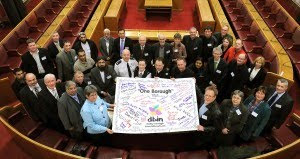 I was unable to get to Dudley on Holy Saturday when the racist EDL came to town but by all accounts there was an excellent united local response. This developed around a locally inter faith inspired One Borough initiative and led to a creative and peaceful counter gathering with the Bishop of Dudley speaking, organised by local inter faith networks, Muslim community groups and Unite Against Fascism.

The EDL exposed their true colours - frustrated by not being able to wind up or get into a fight with a confrontational counter demo (because there wasn't one!) they sought to break the police lines and attacked a mosque but were quickly contained by police. Any nonsense about the EDL not being racist and Islamophobic can now surely be put to rest and the change in attitude by the police authorities in Dudley to how they reacted when the EDL came to Birmingham, should now be repeated around the country. The EDL are an anti Muslim pogrom movement - and if they can't be banned from gathering then they should be treated as violent hooligans and policed in that fashion.

The excellent anti fascist and local community response in Dudley should also be repeated wherever the EDL threaten to gather - concentrating on drawing together a wide coalition of groups for a creative peaceful counter-gathering, away from the EDL, that celebrates multiculturalism rather than directly confronting the EDL, whilst building a strong broad local consensus that demands the police authorities approach policing of the EDL as defending local communities from their abuse and violent attack rather than facilitating the EDL's 'right to protest'.
Posted by Ray Gaston at 10:41