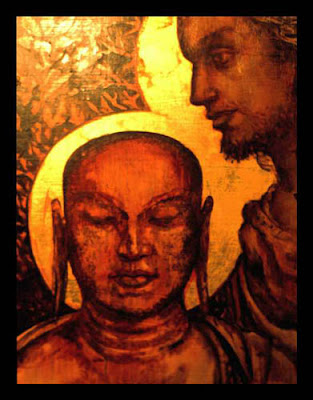 One of the least talked about but growing phenomenons in our contemporary culture is the rise of Buddhism in the west and the increasing number of Christians who are finding benefit in a serious engagement with Buddhism some of whom end up becoming Buddhists. In my last parish the congregation included people who termed themselves Christian - Buddhists, people who were in relationships with Buddhists and/or incorporated Buddhist practices into their own spirituality and others who had less neatly worked out relationships with Buddhism and Christianity even if they strongly and publically identified with one over the other..

One of the most read books on the reading list of my recent module at Queen's on Christianity and Dialogue was Paul Knitter's latest work Without Buddha I could not be a Christian so widely read amongst the Buddhist stream was it that the librarian has ordered extra copies for next year!

I have discovered that Paul now has a blog How a Buddhist Christian Sees It and there is also an interesting podcast of him in discussion on 'Walking more than one path - Is multi religious belonging possible?'

As an alternative to Knitter's approach you can take a look at Harold Netland and Keith Yendall Buddhism: A Christian Exploration and Appraisal which whist respectful and engaing with Buddhsim take a more traditional view of Buddhist - Christian Relations. Or to see how Buddhist - Christian interface has been explored in Sri Lanka see Aloysius Pieris ' Love meets Wisdom