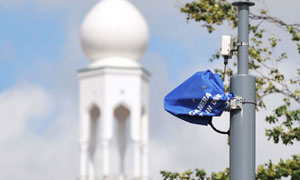 We recently  had  a leaflet posted through our door from the West Midlands Police telling us that the cameras, locally known as 'spy-cams', installed under Project Champion were now actually being removed. This final move announced at the beginning of the month is a great victory for local community action. The police agreed last December to remove them following a critical review. There was a great local campaign last year to get rid of the cameras that had been installed without consultation and were aimed not at tackling street crime but about monitoring the local Muslim community for 'security' purposes. I blogged about this campaign earlier here and here. A notable absence in the leaflet that came through our door was any reference to an apology made to the local community. I am aware that such an apology was made by senior police following the critical review - it would have been good to have had it published in the leaflets.
Posted by Ray Gaston at 09:19