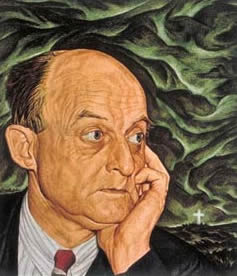 I was listening last night to an excellent Public Broadcast Channel programme from the US called Speaking of Faith. The particular episode was a programme exploring the contemporary relevance of the twentieth century theologian Reinhold Niebuhr. We are off for a few days away in the van over the bank holiday week and while away I was hoping to read Elisabeth Sifton's reflection on her father, the said theologian, called 'The Serenity Prayer - Faith and Politics in Times of Peace & War'  and so was getting myself in the mood. The Serenity Prayer is well known and was made famous by Alcoholics Anonymous.

Some see Niebuhrs' 'Christian Realism' as eclipsed by liberationist theologies or as simply a Christian endorsement of liberal democracy and are suspicious of its potential for conservative interpretation or preventing distinctive Christian witness. However a glance at Niebuhrs actions - support for Union organisation, early support for the Jewish people against Hitler, support for civil rights and speaking out against the Vietnam war, make it difficult to claim him for the right even though he supported nuclear deterrance and was anti-communist in post war US. It could be argued that his anti communism was for good reasons as a resistance to despotic Stalinism and that he was proved right on this against for instance fellow theologian  Karl Barth  who believed in a moral equivalence between the USA and USSR that ignored the gulags. But Niebuhr also cast a strongly critical eye on  US imperialism, influenced the young Martin Luther King and has been radically interpreted  by both  James Cone and Cornel West, hardly therefore a conservative thinker. The argument about Christian distinctiveness is at root an argument about what the church is called to be and further work needs to be done on the implications of Christian realism for contemporary explorations of the relationship between a changing church and wider society.

I find myself increasingly intrigued by Niebuhr's call to embrace in our activism ambiguity, nuance and complexity. Living  a faith based activism that acts in humility, recognises the sinfulness of all our human constructions and is open to change whilst engaging positively in a struggle for social justice. A Niebuhrian influenced activism also requires a neccessarily reflective approach to be aware of when we deceive ourselves into thinking that a particular cause is the true cause and descend into self righteousness. Perhaps Niebuhr may be a good resource for negotiating a more creative North American and European Christian engagement with the Israeli/Palestinian conflict beyond the increasingly unself-critical voices of  'Christian Zionism' and 'Palestinian Solidarity'