One Voice Visit to Birmingham 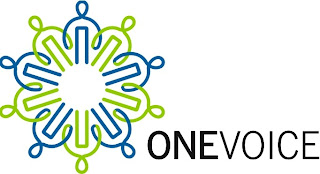 Last month I was involved in hosting a meeting at Queen's with two speakers from the OneVoice Movement to End the Israeli/Palestinian conflict - Daniel Moran from OneVoice Israel and Mohammad Asideh from OneVoice Palestine. The meeting at Queens was part of a wider tour that included meetings with interfaith groups, youth groups and schools, as well as with groups from Churches, Mosques and Synagogues. Daniel and Mohammad met with Muslim and Christian youth at The Feast project in Springfield and with older Christian activists at the Friends of Sabeel prayer group in Moseley. They met with  a Jewish youth group at the  Progressive Synagogue and school groups in Handsworth and elsewhere in the city.

Sharon Alsoodani of OneVoice Europe has written a report of the whole visit to Birmingham and Manchester including the meeting at Queens which can be viewed and downloaded here
Posted by Ray Gaston at 17:34