Nearly 100 Methodists from around the Birmingham District responded to the generous invitation of the local Jewish Community to attend a Chanukah celebration at Birmingham Central Synagogue on Thursday 22nd December.

The invitation was the idea of the local Methodist - Jewish Dialogue group established after the 2010 Methodist Conference to explore the Jewish Communities concerns in relation to the Justice for Palestine & Israel Report. 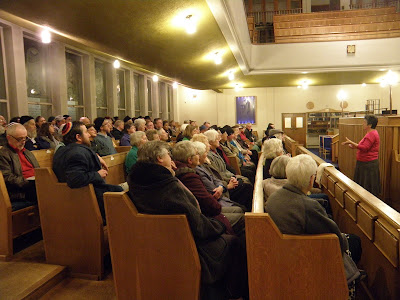 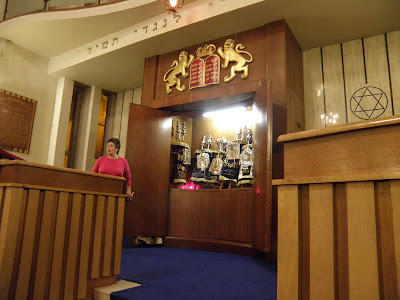 Moving into the Synagogues Community Hall we joined 40-50 members of Birmingham's Jewish Community and a group of Muslim friends from the Birmingham Jewish - Muslim Dialogue group for the ceremony of lighting the Chanukah Menorah led by the Synagogues President Geoffrey Clements. We then watched film clips of reflections on the meaning of Chanukah by the Chief Rabbi Jonathan Sacks. 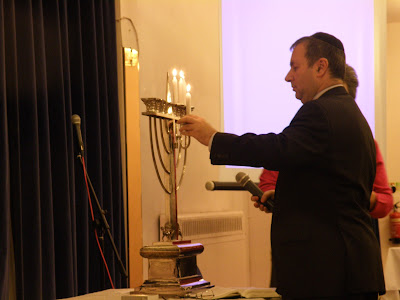 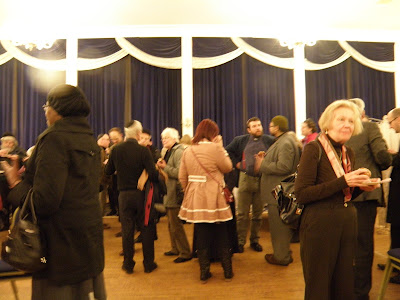 We finished off the evening with an hour eating Traditional Chanukah food and meeting and sharing with one another.

'The Birmingham Jewish Community was delighted to welcome so many Methodists to a Chanukah event held at Birmingham's Central Synagogue. The local Jewish Methodist Dialogue group formed as a response to the Justice for Palestine and Israel Report enabled this event to happen and provided the opportunity for grass roots engagement to build bridges and gain greater understanding.'

'A most inspiring evening of great warmth and goodwill, with many insights being shared formally and informally.'

Organist Peter Harding who came with three generations of his family to the event said:

'A great evening. We all enjoyed it. Grandma had a long conversation with an elderly member of the Jewish community and my son Richard was delighted to be plied with food by many of our hosts. I had some really interesting discussions as well.'

'I was very excited by the response from grassroots Methodists who turned out in such numbers for this event. The dialogue group which has now met for nearly 16 months has been a place where differences have been shared and it has not always been an easy place for any of us to be . However, those of us who have stayed with the process have found it challenging and difficult but also immensely enriching and real relationships have begun to be built. This event was the start of spreading that experience into our wider communities, there is much here to build on and hope for..'
Posted by Ray Gaston at 14:36

It was well worth going, and I hope we can take it further.