'A steady stream of gentle people...' Reflections on a Funeral in the Park 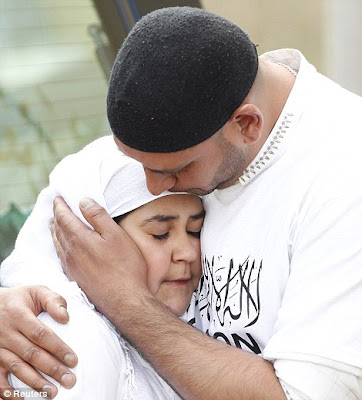 I was away on holiday in Wales during the riots. I was glad  to have been back just in time to be able to attend the funeral of Haroon Jahan, Shazad Ali and his brother Abdul Musavir in Summerfield Park. This was a very moving and dignified occasion. The following post is a reflection on the event by Ramona Kauth who is the Chair of Birmingham Council of Faiths, a Buddhist, an Associate Tutor on my Inter Faith module at Queens and a local resident in the area where the 3 men lived:

It is hard to find words adequate to describe what happened today in the Park. I got there at about 2 pm. Lots of people were there earlier, and there had been prayers said earlier on the loud-speaker system. I could hear it from my house, as I was preparing to go.

When I got there I realised there was an area to one side that had been set aside for women. This was very comfortable for me, relieving me of feeling that I might be intruding.

As people were speaking from the stage, more and more people were arriving in streams, like a river flowing into the Park. At first I thought that this event might be smaller than the one on Sunday, but in the end there were many, many more people. On the news they have said there were 20,000 people.

There was such a strong feeling of quiet, of gentle presence and total focus on the purpose of the gathering. They were very still and moved carefully, with respect and regard for everyone around them. It was as if this area of the park had indeed become a mosque, an open-air mosque. We were there to honour these three young men as martyrs: martyrs for the peace and safety of the community, they are assured a place in history and in heaven.

Of all the speeches the words I remember most are the ones said by the Imam when he said that this day, this event, would be remembered in history. He said it marked a change, a turning point, a change in the perception of Muslims because it was such a clear commitment to the Islamic way of life, the peacefulness and dedication to community and following the teaching, praying five times a day and putting that into practice in ones daily life. And we will always remember this amazing gathering of Muslims to pray together at this event, to support the family and give respect to Haroon, Shazad and Musavir.

It would be very wonderful if some kind of memorial stone may be put up here in the park, to remember these young men, with the words of Tariq Jahan that he spoke so soon after his son's death: that no one should think to respond with violence but on the contrary because only more anger and violence comes from hatred and violence, that the only way to respond is with care and coming together. This was such a timely and powerful response. I think he must be a kind of saint, certainly someone worthy of our respect.

After the final prayers and the sight of the three hearses covered in flowers, everyone left in the way they had arrived, a steady stream of gentle people walking simply and peacefully on their way.

It was all very moving, very thought provoking. I am so glad I was able to be there.