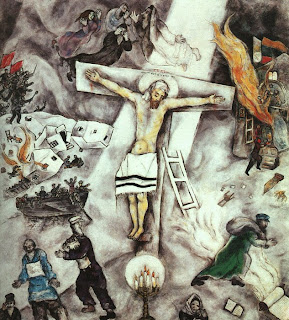 Marc Chagalls 'White Crucifixion' read an excellent reflection on this at The Spiritual Drawing Board
I am leading the Good Friday reflections at the foot of the cross at St Paul's Church Balsall Heath this afternoon between 2-3pm. The following is my introduction to the service
Good Friday is the most solemn day of the Church year as we come together to reflect on the death of Jesus. Over the centuries, Good Friday and the other holy days of this week leading up to and including Easter, have seen terrible vilification of and violence towards Jews, as Christians carried along by the gospel narratives, pinned blame for Jesus’s death not on the Romans who tortured and killed him, but on his own people.

The gospel writers, remember, were writing at a politically sensitive and dangerous time, when the Roman empire had already destroyed Jerusalem and seemed poised ready to stamp out a fragile Christianity, a time when Christianity and Rabbinical Judaism were forming their own separate identities with all the relationship tensions of close siblings – tensions aired for all to see in the writings of the New Testament.

This was not a clever time to flag up the fact of the Roman execution of Jesus – we will hear today what great lengths the gentile writer Luke goes to exonerate the Roman. But a while later, in a more secure environment - for Christians at least - the Apostles Creed, that anchor of our faith, is formulated to declare that Christ died ‘under Pontius Pilate,’ a military governor in a cruel empire, who was eventually removed by that empire from office for being too cruel.

In this post-Holocaust world, we know to our shame that the violence inflicted upon Jews by Christians down the ages is something for which we Christians need to repent. We who are called to love our neighbour need to learn to love ever more deeply, the people who gave us Jesus and the Scriptures.

It is wrong to present the events of Good Friday as involving wholesale Jewish opposition to Jesus. At best, Jesus' struggle was against the entrenched occupying powers which some Jewish leaders in the Temple aided and abetted for personal gain. So despite the history of Good Friday in terms of Christian-Jewish relations, I believe it is possible to understand it as a time for reconciliation between the two faith communities. For Jesus on Calvary symbolizes not only the sufferings of all humankind but, in particular, the sufferings which his brother and sister Jews were experiencing in occupied Palestine. Jesus' death represents the suffering, the trials, the aspirations of many ordinary Jewish people of the time. Certainly there is a long history to overcome in transforming Good Friday into a period of Christian-Jewish reconciliation. But if we better understand the concrete political dynamics that brought Jesus to Calvary, we will be well under way towards beginning that process of transformation.' (1)

So my sisters and brothers in focussing our attention on 'What Killed Jesus' we draw alongside this story not as distant observers pointing the finger at protagonists of the past but as open pilgrims longing to become more whole and holy, longing to be people who act and live the gospel values of love, justice and truth. We come alongside this story bringing our story and allowing it through the conviction of the Holy Spirit to challenge us and comfort us as we allow the paschal mystery to penetrate our own lives.

So we bring the realities of our own experience of and participation in betrayal, our compliance with or oppression by, unjust structures, our experiences of awe and wonder and of brokenness and despair and in the silence and the moment let ourselves be open to experience God touching us with healing love - for as the Apostolic Witness attests by his wounds we shall be healed (2)

(1) From Developments in the liturgy of Holy Week by John Pawlikowski at http://www.jcrelations.net/en/?item=948