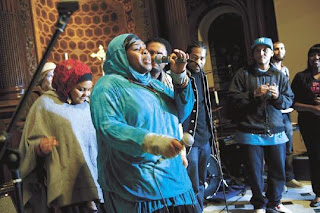 Annie and I have just returned from a lovely 3 days away in our camper van; walking on moors and in bluebell covered woods in West Yorkshire and visiting friends. On Monday we spent a lovely 3 hours with a dear friend Firdaws Khan. Firdaws who is a Muslim ran workshops on Christian and Muslim attitudes to spirituality, dialogue, war and peace with me for the Peace School for two years and she chose this poem by Rumi to recite at our wedding last November. Yesterday she was particularly enthusiastic to tell me about the work of the Radical Middle Way project and keen to point me in the direction of their website and some of the work of her spiritual mentor Shaykha Halima Krausen who has recently participated in the latest RMW speaking tour. I first came across RMW when I was Vicar of All Hallows in Hyde Park Leeds when the local Makkah Masjid hosted one of its first events in 2005. RMW sees itself as an attempt to articulate what might be termed 'Traditionalist' Islam in contemporary ways they say on their web site

The Radical Middle Way (RMW) is a revolutionary grassroots initiative aimed at articulating a relevant mainstream understanding of Islam that is dynamic, proactive and relevant to young British Muslims.

Through public lectures, seminars, workshops and cultural programs, we engage with real issues through legitimate orthodox scholarship. The RMW is about erasing the schism between public and private discourse over issues affecting Islam and Muslims in the modern world – we believe in open debate and meaningful discussion.

As I searched the website yesterday evening on our return home I came across a very interesting article by playwright David Edgar exploring a different strand within contemporary Islam - 'Islamism'. His article draws attention to an excellent paper published in Race and Class by Arun Kundani entiltled Islamism and the Roots of Liberal Rage. An abstract for the paper states:

As the neoconservative idea of a clash of civilisations is increasingly challenged, a number of liberal writers — Paul Berman, Nick Cohen, Martin Amis, Andrew Anthony, Bernard Henry-Lévy and Christopher Hitchens — are rethinking the `war on terror' as a cold war against Islamism, defined as a totalitarian political movement analogous to fascism or Stalinism. Europe is the new front line in this battle for the `hearts and minds' of Muslims and, it is argued, violations of certain human rights are necessary in the name of defending liberal freedoms. Yet such an analysis fails to comprehend the complex dynamics of Islamism in Europe. Members of a new generation of European Muslims are creating a globalised Islamic identity that is distanced from the ethnic cultures of their parents — a process that is more likely to lead to new forms of democratic activism than to political violence unless diverted from this course by counter-productive policies.

This is a very different and more sophisticated analysis of Islamism to the one presented by Ed Hussein in his popular and widely read and often quoted book The Islamist and by the Quilliam Foundation founded on the books success. 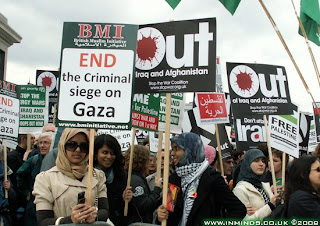 Kundani's analysis echoes my own experience of the creative involvement of Muslims - who have often been influenced by Islamist interpretations of the tradition - in political and community activism in Leeds and Birmingham, be that in the anti-war and Palestinian solidarity movements with organisations like Muslim Association of Britain, locally rooted community politics like that practiced by the councillors of Respect in Sparkbrook Birmingham, or the openness to inter faith encounter I've experienced from organisations like the Islamic Society of Britain.
What I have experienced is an ability for creative coalition building and an openness to dialogue that crosses and challenges boundaries both within Islam and beyond.
The problem for the secular liberal commentators is that this new Islamic engagment -Traditionalist or Islamist - is articulated through the language of faith, bringing God back into the public arena, and the problem for the government is that it is an activism - particularly where Islamism is concerned - rooted in resistance to its foreign and domestic policies. The aborted attempts to foster division between engaged Traditionalist and Islamist tendancies in British Islam through organisations like Quilliam, are clearly not working if examples of recent cooperation is anything to go by. My friend Firdaws told me of the coming together of the Traditionalist RMV and the Islamist ISB to host events in Bradford. The truth is that vibrant, challenging and engaged forms of Islam in Britain are on the rise and deserve acknowledgement as a constructive contributor to the democratic process in a truly multicultural society. As Edgar says in the last paragraph of his article
Ziauddin Sardar has argued that the problem with the ex-Islamist Quilliam Foundation is not that it is anti-fundamentalist or anti-segregationist, but that it is anti-political; it wants Muslims to keep quiet. In fact, as Kundnani argues, a whole generation of British Muslims (are) .....in search of new ways of being Muslim, in public, in contemporary Europe. What could be more welcome?
Posted by Ray Gaston at 22:12