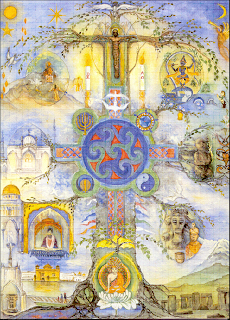 Below is a description by the artist about the images in this picture. I printed this picture on the front of the Module Handbook for a new course I ran this year on Christianity and Inter Faith Relations - Theology, Dialogue and Engagement at Queen's. I also have a copy of the picture on my study door.

How do I feel about the picture?

What theology of religions do I think the artist portraying in this picture?

Who is Christ in this picture and what is his relationship to other traditions ?

What does the Trinity represent and what is its relationship to other faiths?

The central structure is a tree - Norseman would have called it Yggdrasil, the World Tree, with its roots and branches connecting Heaven, Earth and Hell. It is now the Tree of Life. At its centre is a Celtic symbol for the Trinity, the One God over all.

In the four spandrels of the Celtic cross are symbols of world faith and belief: the seven-branched candlestick of the Jewish faith, the Wheel of Life common to Hinduism and Buddhism, and symbols of Chinese and Sikh religion. Round the Centre are dark clouds, which are the Cloud of Unknowing. Outside, the religions of the world offer light.

At the foot of the Tree the Lord Buddha sits in a lotus flower, symbol of purity and eternity; the bo tree under which he received enlightenment arches over his head. At the top of the Tree (which has become a cross) the crucified, risen and ascended Christ stretches out His arms in blessing. Above Him the Tree bursts out in leaves which are for the healing of the nations.

On the left of the Tree are: top left: Judaism. Moses receives the Tablets of the Law on Mount Sinai. Centre left: Islam is represented by the Mihrab of the Pearl Mosque in Delhi. Lower left: the Sikh Scriptures are read in the Golden Temple of Arnritsar. Top right: the Lord Krishna (a Hindu 'avatar' or incarnation of the divine) dances on the head of the evil serpent Kaliya and rescues a worshipper. Centre and lower right represent ancient belief systems which use senior members of society and respected ancestors to connect them with the divine - a Polynesian Tiki, and a West African king (an Oni of Ife) with a carving of an Ancestor Spirit.

In the four corners are symbols of the elements of earth, air, fire and water. On the earth (lower right) are Stonehenge, perhaps representing the dawn of religious consciousness, and the highest mountains, home of the divine Air has the symbolism of the sun, guiding stars and tongues of baptismal fire. And water is for purifying, and for life.