WOMEN OF FAITH PART TWO "God has placed abilities and callings in our hearts, without regard to gender" 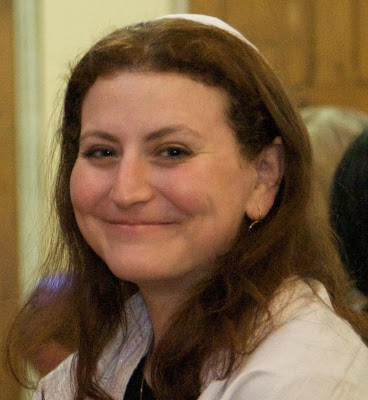 To mark Women's History Month PULTA has asked women who are faith inspired activists or leaders to share a story of one women from history who has inspired them as a person of faith. In the second of the series Rabbi Debbie Young Somers (pictured left) who is Associate Rabbi at West London Synagogue and an activist in the Inter Faith movement introduces to us the remarkable story of Rabbi Regina Jonas 1902 -1944

“God has placed abilities and callings in our hearts, without regard to gender. Thus each of us has the duty, whether man or woman, to realise those gifts God has given.” Regina Jonas, C.-V.-Zeitung, June 23, 1938[1]

It is often a surprise to people to discover that women can be Rabbis at all, let alone that there was one in the first half of the twentieth century: Regina Jonas. Even as a child Regina talked about becoming a Rabbi, and it seems from reflections of her classmates that it didn’t even occur to them that this would be difficult for a woman. . She began her career teaching in a Jewish continuing to teach even through her studies at Der Wissenschaft Des Judentum – the Academy for the Science of Judaism, one of only two institutes (the other in Breslau) that trained Rabbis and would admit women to studies (but not rabbinic ordination). She submitted her thesis there in 1930, a halachic (Jewish legal) treatise entitled “Can Women Serve as Rabbis?”

“[…] because I personally love this profession and would love to practice it if it were ever possible,”[2]

Perhaps surprisingly, Jonas’s thesis reveals that she was personally, theologically and ritually rather orthodox. I wonder how many of my colleagues would today argue the case in the way Jonas does.

These tensions meant that Jonas’s vision of a female rabbinate didn’t necessarily look like ours today. For example she didn’t wear a tallit (prayer shawl), although she showed in her thesis that women could, and she believed in the separation of genders in services, but showed this was no obstacle as the Rabbi tended to have their own entrance via the vestry. She also argues that women Rabbis must make a choice between being a wife and mother or a Rabbi.

Eduard Baneth (1855-1930), her Talmud professor, was responsible for ordaining candidates at the Academy. He awarded her a grade of good on her thesis. He sadly died shortly after Jonas’s thesis was marked, and his successor, Chanoch Albeck, was not prepared to ordain her. But Jonas didn’t give up the fight for ordination. On December the twenty sixth 1935, Rabbi Dr Max Dienemann (1898-1948), the manager of Liberaler Rabbiner-Verband (the Liberal Rabbis Association) invited her to his home in Offenbach to be interviewed for ordination. He ordained her the next day.

The fact that she had been ordained by one individual Rabbi, and not a Rabbinic institution, meant that there was no official support behind her. Today this is the case for a small number of Orthodox women who have been granted s’michah, (ordination) by individual Rabbis, but who have generally not found employment with a community as a Rabbi, and have no movement or institutions to support and endorse their roles. It is a sad twist of history that Jonas was only able to take up Rabbinic roles when her male colleagues began to leave Germany in fear for their safety, and then began to be deported, leaving beleaguered communities with no Rabbis.
On November the 6th, 1942, Jonas was herself deported to Theresienstadt. She continued her rabbinic work there, both pastorally and intellectually. She was a part of Victor Frankl’s team offering support to people as they first arrived at the camp, and she also delivered twenty four lectures on biblical, Talmudic and religious themes which demonstrated the diverse topics she could turn her hand to. A list of these lectures can be found in the Theresienstadt archives entitled “Lectures by the Only Female Rabbi: Regina Jonas”[3]

On October twelfth 1944 one of the last transfers from Theresienstadt to Auschwitz left with Regina Jonas and her mum on board. It seems likely that they were murdered upon their arrival there. This was the tragic ending of the story of the first woman Rabbi, and it remained the end until 1991, when Jonas’s documents, which had lain undisturbed for over 45 years in Coswig, east of Berlin, were discovered by Katharina von Kellerman who was researching Protestant and Jewish women seeking ordination in 1930’s Germany. The packet she discovered included newspaper clippings, lecture cards, 2 photographs, and many letters.

Why wasn’t her story told before 1991? This has remained a mystery that we can only speculate about. Leo Baeck who was her teacher, supporter and co-prisoner in Theresienstadt did not perish in the Holocaust and came to London where he helped found a Rabbinic College after the war. Viktor Frankl whose team of carers in Theresienstadt Jonas worked in, wrote about his experiences in the camps and never mentioned her as far as we know. Considering the controversy that Jonas must have ignited in the German Jewish community makes it even more surprising that her story was not told. Today, much continues in honour of Jonas, and what she stands for in our imaginations as a pioneer in Jewish women’s rights and rabbinic ordination. She won’t be forgotten or ignored again.