LEARNING TOGETHER WITH MUSLIMS AND JEWS - DEVELOPMENTS AT QUEEN'S 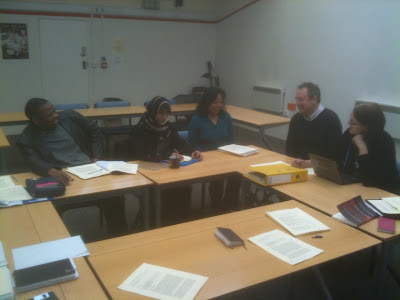 Last week saw the end of the teaching term at Queen's and the end of the first of a new venture - a seminar course that had our students studying alongside Muslim students recruited through our friends The Al Mahdi Institute. The inspiration for the course came from Richard Sudworth who did an extended placement at Al Mahdi as part of his ordination training in 2009 and we have been working to bring it to fruition since then.
It was small beginnings with 4 students from Queens being joined by 3 students recruited from Al Mahdi. The course' The Common Good in Christianity and Islam' looked at how both traditions have engaged with notions of the 'Common Good' and looking at the diversity of approaches in each tradition to contemporary issues that relate to 'The Common Good' such as Economics, Reconciliation & Conflict, Human Rights and Governance etc. Richard and myself were joined in facilitating the course by Dr Ian Williams who works for the Markfield Institute.
Much of the course involved exploring Qur'anic and Biblical texts together, drawing upon but not limited by, the methodology of Scriptural Reasoning.
We hope to expand the course next year and are developing our links with both established and developing Islamic educational institutions in the Birmingham and Midlands area.
We are also in discussions with the Council of Christians & Jews about building into our first year Inter Faith Studies theme week a day long Encounter Workshop where our students and Biblical Studies tutors will be joined with recently ordained Rabbis and Rabbinical students and a Jewish scholar to explore together the Tanakh/Old Testament/Hebrew Bible
Posted by Ray Gaston at 09:53