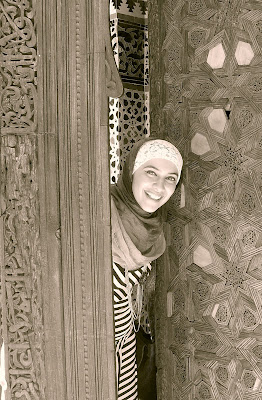 To mark Women's History Month PULTA has asked Women who are faith inspired activists or leaders to share a story of one women from history who has inspired them as a person of faith. Our first offering is from Afshaan Henna (pictured left) a Human Rights Activist with REPRIEVE and Caseworker with the Citizen's Advice Bureau. Afshaan tells us "When asked to write about how a woman in my faith has influenced me, as a Muslim I knew I was spoilt for choice." From that choice she offers us the inspiring story of Zainab granddaughter of the Prophet Muhammad.

When working in cosmopolitan London I remember talking to a colleague socially about significant women in Islam. He looked at me with surprise and said he did not realise there were any significant women in Islam! This is far from the reality. When asked to write about how a woman in my faith has influenced me, as a Muslim I knew I was spoilt for choice. After all there is Maryam mother of Jesus who has a chapter in the Qur’an named after her, Khadija the wife of the Prophet Muhammad (pbuh) a renowned business woman, the only daughter of the Prophet, Fatima whose status was such that the Prophet would always stand when she entered a room and give up his seat for her. These are but a few examples. But one woman in particular who always evokes tears when I think of her courage and dedication to justice is Zainab daughter of Imam Ali (as) and the granddaughter of the Prophet. When the city of Kerbala in Iraq is mentioned instantly it is synonymous with Imam Hussain (as) who was killed by the armies of Ummayad ruler Yazid. But he himself said that of all those in Kerbala no-one suffered more than Zainab. She witnessed the death of not only of her own two young children but almost all of her family. As a captive she was put in chains and her hijab ripped off her, despite the assaults she defended all the remaining children and women, who looked to her as their leader. As a prisoner she was bought before those men in power responsible for the deaths of her family, she remained resolute and addressed the Ummayad Court with such resolution and courage. Despite the abuse and torture she experienced she did not falter once when addressing the Court:"What you consider today as spoils of war will become ruins for you tomorrow and on that day you will find what you have sent from before. Allah (SWT) does not oppress his servants. I express my complaint only to Allah (SWT) and have trust in Him. You may therefore do any treachery that you have, make all your attempts, and try all you can. By Allah (SWT), you cannot remove us from the minds (of people), and you cannot fade our message. You will never reach our glory and can never wash the stain of this crime from your hands. Your decisions will not be stable, your period of ruling will be short, and your population will scatter.”

It is the lessons learnt from Kerbala and my absolute love and admiration of Zainab that I work in the field of Human Rights and became wholeheartedly committed to Reprieve’s Pakistan Police Torture Project. Without her strength, faith and sacrifice I would not have followed this path and would not have experienced the privilege of helping some of the most vulnerable people of society. Whenever I’m faced with addressing an audience my prayer is always to be as strong and eloquent as Zainab. My work at Reprieve is largely influenced by her life.
Posted by Ray Gaston at 16:20