'Always, always you alone are the One Reality' - Exploring Sikhism 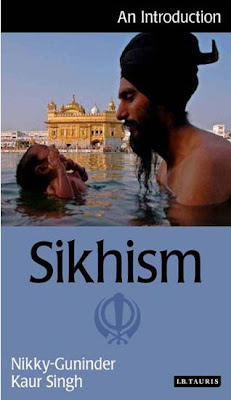 I recently enjoyed reading Nikky Guninder Kaur Singh's Sikhism: An Introduction. I had previously encountered her lovely translation of verses from the Sikh Gurus The Name of My Beloved. The book is a great introduction to Sikh tradition from someone who clearly loves and cherishes her faith but is also willing to caste a critical eye over some of its inherited practices. The writer is one of a number of interesting Sikh Scholars, Birmingham's Jagbir Jhutti-Johal  and her book Sikhism Today is another, who are wanting to highlight the potentially egalitarian nature of the Sikh tradition and bring this into critical encounter with historical and contemporary patriarchal and discriminatory practice, as well as into dialogue with contemporary ethical and social issues. These writers also see immense resources within the Sikh tradition for making a particular Sikh contribution to an understanding of interreligious dialogue and religious plurality as Nikky Guninder points out:

"The Sikh monotheistic vision is different from that of the West. As a continuation of the Abrahamic traditions, Islam penetrated India with the concept of the 'One God', which conflicted with the polyphonic imagination of the diverse schools of the Hindus, Buddhists and Jains. In the Sikh belief, there is no opposition between the One and the many, nor is there any dualism between unity and plurality. The Guru Granth claims 'ikkasu te hoio ananta nanak ekasu mahi samae jio - from the One issue myriads and into the One they are ultimately assimilated' (GG:131). Unity becomes plurality, and plurality eventually becomes unity.........it is not an exclusivist monotheism, but rather an inclusive Oneness of Being that the Guru Granth reiterates over and over: 'Always, always you alone are the One Reality - sada sada tun eku hai' (GG: 139). Persian terminology is used to emphasize the unity of being: ' asti ek digari kui ek tui ek tui' - only the One is, who else could there be? Only you, you only' (GG:144). Again: 'hindu turk ka sahib ek - Hindus and Muslims share the One sovereign' (GG:1158). Since everything is a manifestation of that One being, every manifestation would be part of it. No god, no body and no thing is excluded from this all-pervasive being. The arc of the Oan flying off launches the imagination to intuit the unintuitable One, and everybody is welcome to perceive that One in their own way. Blotting out conventional icons and images that created divisions and animosities, the mathematical One embraces the Tao, Yahweh, Ram, Allah, Parvati...this numerical symbol has the potential to end conflicts over my god/ your god."

Nikky-Guninder Kaur Singh An Introduction to Sikhism (I B Tauris 2011) p61
Posted by Ray Gaston at 13:49