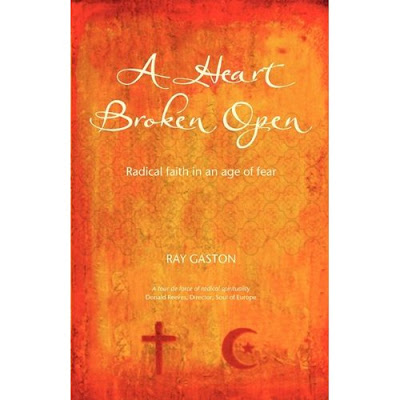 My book A Heart Broken Open - Radical Faith in an Age of Fear is being officially launched on Monday evening at Queen's Foundation for Ecumenical Theological Education. Speakers at the launch will be

Salma is a local councillor in Birmingham and Respect Party parliamentary candidate for the Hall Green Constituency and a regular commentator in the national and local media on current affairs and has appeared on BBC TVs Question Time and BBC Radio’s Any Questions. She is author of ‘Muslim Women and the War on Terror’ Feminist Review 2008. She also wrote a Foreward to the book.

Toby Howarth
Bishop of Birmingham’s advisor on Interfaith Relations , Vicar of St Christopher’s Church Sparkhill and a member of the Church of England's Presence and Engagement Task Force

Hussein Mehdi
Hussein who was born in Iraq and experienced the civil war in Lebanon as a child is a member of the Ahlul Bayt Islamic Centre in Leeds. He invited me to visit Iraq with him in 2004 – the story of the visit forms a chapter of the book.

The publishers press release for the launch is published below:

A new book with a radical approach to Christian engagement with Islam is being launched at the Queens Foundation for Ecumenical Theological Education on Monday 15th March 2010 at 6pm A Heart Broken Open – Radical Faith in an Age of Fear is the moving and insightful reflection by an Christian Minister of his grassroots engagement with Islam through relationships built from inner-city parish ministry in Leeds to the streets of Karbala, Iraq at a time of rising Islamophobia and the ’war on terror’.
The author offers a way of witnessing to Christ’s peace whilst entering into the faith of ‘the other’ with humility and love, allowing the way of Islam and the practice of Muslims to touch, challenge and inspire his Christian faith and feed his hunger for God. In so doing he offers us inspiration in finding our own ways to walk with confidence in Christ’s love amongst neighbours of many faiths and none.


Ray Gaston was in parish ministry in inner city Leeds for 12 years. He is now Inter Faith Studies Tutor and Enabler with The Queens Foundation for Ecumenical Theological Education and The Birmingham District of the Methodist Church. He lives with his family in Sparkhill, Birmingham.


Praise for A Heart Broken Open


This book is deeply personal and moving … I recommend it as of real value at grassroots level where the real action lies. It counters Islamophobia on behalf of radical Christianity
Revd Dr Frank Whaling, emeritus Professor in Religious Studies, Edinburgh University


Ray’s story is a profound and uplifting one … By acting as an agent of change and at the same time being open to change himself, Ray exemplifies a powerful alternative to the polarizing discourse which views difference as a threat
Salma Yaqoob, Chair, Birmingham Stop The War Coalition and Birmingham City Councillor. Leader of The Respect Party and Parliamentary Candidate for Hall Green, Birmingham


As Christians we need to be in the marginal, unexpected and controversial places so that our witness can be heard clearly and the heart put into our interfaith efforts. This is a book of love for God and our Muslim sisters and brothers; witness is the light shining from Ray's heart which has been opened so powerfully.
Julian Bond, Executive Director Christian-Muslim Forum


This book is a beautifully written spiritual adventure that will resonate with all those who are seekers of a spiritual path, and at the same time it is scholarly, courageous, honest and deeply earnest in asking the questions most will not ask and in sharing the journey of a heart seeking peace.
Firdaws Khan, Community Activist


Ray's journey alongside Muslims is an exhilarating read. It is a journey of vulnerability that risks the discovery of God beyond the confines of the church, is shaped by Christian worship and scriptural reflection, and is politically engaged. In short, it is a testimony of discipleship for our times.
Richard Sudworth, author of Distinctly Welcoming – Christian Presence in a Multi Faith Society


To see extracts of the book follow this link http://www.ionabooks.com/New-recenttitles/9781905010615-A-Heart-Broken-Open.html


A Heart Broken Open - Radical faith in an age of fear
Ray Gaston
ISBN 978 1 905010 61 5
Wild Goose Publications (www.ionabooks.com)
To arrange an interview with the author contact him direct on
To obtain a review copy of the book contact Lorna Rae Sutton on 0141 332 6292
or by email at lorna@ionabooks.com
Posted by Ray Gaston at 16:07