Freed to Love One's Neighbour - Who is Anyone and Everyone 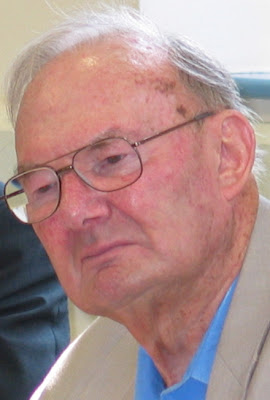 Today was John Hick's funeral. At lunch at Queen's, in the announcements, our Principal David Hewlett referred to this and my colleague John Hull a long standing friend of Hick  attended his funeral this afternoon. I wrote my Master of Theology dissertation on Hick back in 1996 critically comparing his Philosophy of Religious Pluralism to Raimundo Panikkar's.

As David said at lunchtime whilst many in the Christian theological world may have disagreed with Hick, the truth is that he was a truly remarkable human being.

It is perhaps fitting on this day of his funeral to quote the following passage from one of his later books The Fifth Dimension : An Exploration of the Spritual Realm.

The world religions all report that, as it affects humanity, the Real or Ultimate is benign and that we live in what is finally, from our point of view, a serendipitous universe. To become conscious in some degree of the eternally Real, through one of its humanly experiencable manifestations, is in that degree to be liberated from the anxious, grasping ego, and freed to love one's neighbour, who is anyone and everyone. We see something of the extraordinary possibilities of our own nature, when it becomes open to the Transcendent, in the lives of the saints or mahatmas of every tradition.....

The metaphysical dogmas about which the different religions differ so strongly, and sometimes violently, are legitimate speculations, but should not be absolutised, as infallible dogmas. In each religious and non - religious worldview, in so far as it is in alignment with the Real, we live within a true myth - a cosmic story which is not literally true but which nevertheless evokes an appropriate life response to the Real.

Because we experience the Real in benign forms we can be confident that the human potential is destined to be fulfilled and that this present life is therefore an episode within a much longer process. A series of further finite lives awaits us in which our deeper self, living through a series of concious egos, is formed in response to the contingencies of finite existence. In all that we do we are affecting, positively or negatively, our own future selves. Perhaps ultimately, with the fulfilment of the creative process, finite personality will have served its purpose and become one with eternal Reality, but we do not at present need to know the final future.

What we do need to know is how to live now. This is the way of love, witnessed to by the saints and mystics of all the great traditions.

A few quotes on Love from “the greatest achievement in life,” my free ebook on comparative mysticism:


“Love your neighbor like something which you yourself are. For all souls are one. Each is a spark from the original soul and this soul is wholly inherent in all souls, just as your soul is in all members of your body.” Shmelke of Nikolsburg J

“All that is not One must ever suffer with the wound of Absence, and whoever in Love’s city enters, finds but room for One and, but in Oneness, Union.” Jami I

“The lamp is different, but the light is the same. Love alone can end their quarrel. Love alone comes to the rescue when you cry for help against their arguments.” Rumi [Mawlana] I

“Meditate on the divinity within yourself. Drink the nectar of love that continually pours from the heart of God.” Lalla H

“Spiritual love is different. …it leads to unity with the beloved. This unity in love remains forever and ever, always alive, both within and without, and each moment you live in love. It will swallow you completely until there is no ‘you.’ There is only love.” Amritanandamayi Ma [Amma(chi)] H

"Even offering three hundred bowls of food three times a day does not match the spiritual merit gained in one moment of love." Nagarjuna B