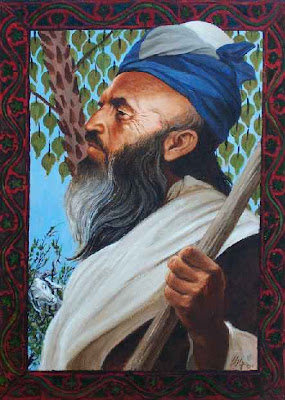 Last week I blogged about a meeting I was speaking at in Stafford on 'Children of Abraham' below The Curate of St Mary's Stafford Revd Mandy Walker offers us her reflections on the meeting.

On Tuesday 3 May seventy or so of us from Stafford and the surrounding area gathered at the Collegiate Church of St Mary’s in Stafford, hosted by Rev Prebendary Graham Fowell. We were people from Jewish, Muslim and Christian faith. The programme was entitled, “The Children of Abraham Common Beliefs, Common Values”

The evening was introduced by Hisfa Haroon-Iqbal, Chair of Stafford and District Friends of Faith based at Staffordshire University. Each of the four speakers was asked to address the following three questions; what is the core belief of your religious tradition? What about Abraham then? And how can you uphold your core beliefs, without undermining the distinction of your own tradition?

First to speak was Rachel Berkson from the Jewish Faith, a leader in the Hebrew Congregation of Stoke on Trent, Rev Ray Gaston from the Queen’s Foundation followed representing Christianity, Dr Musharaf Hussain from the Karimia Institute Nottingham represented Islam. Finally Heather Farr, an educationalist spoke on the importance of Religious Education in a secular society. A lively question and answer session followed and concluded with each faith leader leading a short prayer.

Some reflections: There was a great richness in bringing together people of faith, common to all was a desire to be faithful and wholly committed to God and to work out what their faith means in their lives, seeking to be distinct form those around them. Each faith pointed to a life of prayer to a monotheistic God who loved and cared for creation. I found it very moving and helpful be lead in prayer by those who hold a faith different to mine.

Abraham is figure shared by Jewish, Islamic and Christian people; each upheld Abraham as a man of faith who sought to follow God in his daily life. Differences in faith focussed on the personal nature of faith in God and whilst each faith recognises the historical Jesus, the answer to who Jesus is the key difference for each faith.

Common to each speaker was a sense of journeying in faith, this raises the possibility and hope for all people of faith to learn and grow both in their own faith and of others. I was reminded of the picture in the Christian scriptures in Luke 24 of the two disciples bewildered and disillusioned after Jesus’ death; who were met on the road by a stranger who walked with them, listened and then opened up and explained the scriptures.

Heather Farr spoke convincingly of the importance of educating our young people in all faiths so that we can journey together in life without prejudice and fear of difference. Two people from the audience, both over 60, admitted they knew very little about other faiths and would like to learn more about the people they share their community with. This struck me as being very important; an openness to travel together, to celebrate difference whilst still being free and able to speak and act confidently in our faith. As Ray reminded us; it is in acting out our faith in love that we draw nearer to God as God journeys with us.

The picture above is Abraham by Louis S. Glanzman
Posted by Ray Gaston at 12:33