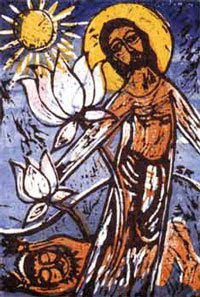 I am really pleased to be heading off later this morning to preach and preside at the Easter Communion Service of a local Methodist Church in a neighbouring circuit. One of the disadvantages of not being in Parish or Circuit ministry is that it is easy to end up not preaching and presiding at Easter. The last few years have seen me either running the biannual inter faith studies Easter residential at Queens or celebrating Easter whilst taking a holiday break. The local Methodists asked me some months ago if I would step in and preach on Easter Sunday as their own minister will be on Sabbatical. It wasn't until I started reflecting on what I wanted to say that I realised I hadn't led an Easter Sunday service since I left All Hallows in 2007!
As part of my preparation I reviewed what I had said in the last two years of my Easter preaching. All Hallows has a web site and at that time rudimentary recordings were made of sermons and posted for people to listen to. So I revisited them and rediscovered that in 2006 I had preached an Easter series on 1 Corinthians 15 called 'Paul and Resurrection Faith.' The series was part of a wider series on 'Reclaiming Paul' based on some study on Paul that I had been engaged upon and the sermons drew heavily upon the work of Neil Elliot in his Liberating Paul, Richard Horsley's Commentary on 1 Corinthians and his work on Paul and Empire and John Dominic Crossan's book In Search of Paul all of which had been part of my exploration.
The semons can be listened to here.
Posted by Ray Gaston at 07:48