The Sound of Prayer 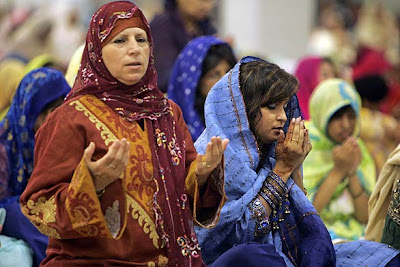 This is a beautiful post from Angela Shier Jones' excellent blog The Kneeler
Good morning God,
I woke to a familiar sound today, even though the language was foreign, the voice unknown, there was no mistaking the sound of prayer. The muslim daughter of the woman in the bed opposite was saying her prayers, her mother joining in, as and how she was able.
They included me into this small intimate circle and so I was able to meet with you in the company of friends, understanding for the first time ever, what speaking in tongues really means.
As the daughter prayed, it was obvious when she was using old familiar words, gifted words from saints long since passed. These she wrapped around us like a winter blanket, their undulating cadences being like the folds of a cloth which she absentmindedly rearranged so that they fell comfortably, snugly around us. I could hear the words of the Lord's prayer as she prayed her morning prayers and the words of the psalms as she recited her morning Suras.
And when the familiar words had lulled us into warm, safe and secure spaces, she spoke from the heart - her words losing nothing of their rhythm, but now taking on an almost musical quality , a sweet lullaby for those she loved.
And you were there, and I heard and understood, her prayer for me, for her mother, for herself, for the hospital staff, and for the wider world. Her language universal, even though her vocabulary was foreign to me.
She called you Allah, and I heard it as Abba - and I swear they were the same, for you were with us. And your gift of tongues enabled me to utter my Amen, in the space you made sacred beside a hospital bed.
Thank you God.
Posted by Ray Gaston at 16:12