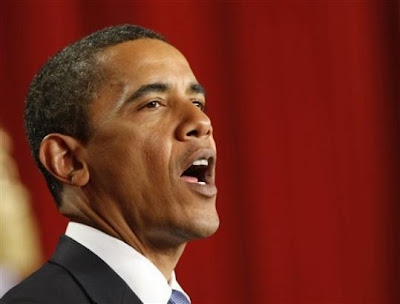 Okay on the positive side - it was an extremely impressive and engaging piece of oratory, if a little patronising at times !
I'm trying not to be cynical about this and have been checking out responses on the web over the last few days. Here are some of the most interesting I've come across trying to give a balance between intelligent positive and negative responses:
European Muslim Scholar and activist Tariq Ramadan was cautiously open and positive about Obama's Cairo speech.
Robert Fisk cut through the pre-speech hype in the Independent the day before. His passionately felt arguments obviously struck a chord at the Muslim Association of Britain who posted his article on their web page. But the day after, again in The Independent he was a little more positive
The Israeli newspaper Haaretz had this interesting take on the Obama speech.
Whilst Jennifer Lowenstein a member of the US sister organisation of the Israeli Committee Against House Demolitions takes a different approach in How Much Really Separates Obama and Netanyahu?
The Inter Press Service also took a more critical approach and Noam Chomsky questions if anything has really changed.